Hello friends, in today’s article we see the difference between Investment and Speculation from chapter 4 of the security analysis book. so let’s see the Benjamin Graham point of view.

The Previous Chapter 3: Sources of Information

What People think about It:-Difference between Investment and Speculation 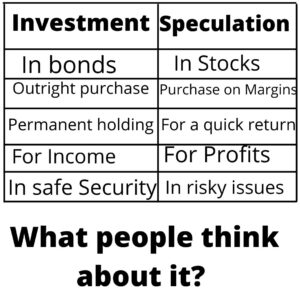 so people say, ” Invest in bonds is an investment, and invest in stocks is called speculation.”

Some people say, ” We buy the outright purchases that investment and speculation when you purchase on margin ( means taking borrowed money and buy the stocks).

People say, ” Investment is permanent holdings and Speculation is for a quick return.”

other people say, ” Investment is for income and speculation is for profits”

Investment is in safe securities and speculation in risky issues. (Difference between Investment and Speculation)

so authors say, ” this all is bullshit whatever above peoples think.”

So Author starts with the first point and say,

” If you buy bonds that secure but companies earning is not sufficient, so those interest payment not fully paid by the companies, so this is also the speculation.”

so go on to the second point from the above table i.e. Outright Purchases and purchases on Margin

If you want to purchase security and this security is shit, so then this is not a good opportunity so whatever you buy on outright purchases, this also speculation.

If you get the wonderful stocks and you get the maximum discount and margin of safety but you buy on purchase on margin this is also Investment and this maybe becomes a good investment.

This is only the intention of purchase so If someone says, ” I buy this security and keep it so what is the benefit of that if they keep that security. so you have a purpose in buying that whatever your purpose i.e. Profits or income.

So in this, not any temporary or permanent,  If they reach at purpose in a short time or long term time, this doesn’t matter, the matter is that purpose is accomplished, whatever the time frame.

from where it comes, it doesn’t matter

they come in form of income or profits this all depends on your fundamental circumstance, which means you need every month money for maintaining your lifestyle or you need profits for long terms.

So we can’t say, ” income is investment and speculation is profits”

because of the above fundamental circumstances. (Difference between Investment and Speculation)

so safety and risky is dependent on the different points of view of people.

So if one man puts money on a racehorse and he thinks they will win the racing then in his point of view they think it’s a good investment and safe money.

so some people think in 1929, investors think to put money stocks is a safe investment and they think this stock has never gone down because now a new era is beginning and the stock goes high.

so whatever they pay the price, they are justifiable for that stocks in 1929.

This depends on the perspective to perspective so we can’t separate the investment and speculation.

So all this statement neglect by the author and they give his own point of view of definition of Investment and Speculation.

An investment operation is one which upon thorough analysis, promises safety of the principle and a satisfactory return.

If operators not meeting these requirements are speculations.

Thorough Analysis means studying the facts while applying standards of safety and value.

Safety of Principles means, Your principles are not going anywhere in normal circumstances.

Like lite situation happen in the market, except the stream events like recession, depression, etc so then there is no safety in this situation on investment principle, this told by the Benjamin Graham

Satisfactory Returns may be in any form like capital appreciation, dividends returns, or interest payments.

the author also define another form of Investment

An investment operation is one that can be justified on both qualitative and quantitative grounds.

after this author gives  Examples of Speculation.

It has one difficulty was they are callable on any dividend date at $11.

So the author says, ” Buying these preferred stocks at 12 3/4 is speculating and we put the 10% of our principal.

so how this happen explain below

Suppose if the issue is called on the very first date i.e. 15 April 1935, then you will get the $11 as call price plus a Dividend.

so now you think, this is a very simple calculation, so who do like this stupidity.

so, guys, everyone wants to become rich in the stock market and no one wants to do work for that that why we all do stupid things.

So the author says, ” buying these preferred stocks, you are doing speculations.”

You were wagering that issue would not be called for some years to come, therefore it is speculation.

so the author gives the Example of Investment:

In real-time, the same stocks of General Electrics, the issue was called that every month at $11 per share on 15 April 1935. so from this announcement. (Difference between Investment and Speculation)

The price promptly decreased to $11 so the author says, ” this is the investment opportunity.”

So let’s see how?

Now you have the opportunity for profitable short-term investment on margin investors buying.

so this type of return is very much best for an annual year.

So after this example, the author gives the four types of investment

Types of  Investment:-(Difference between Investment and Speculation)

1) Business Investment: Your money put in any business

2) financial Investment: Your money put in any securities like bonds, stocks, etc.

3) sheltered Investment: In this, you buy those securities that have minimum risk and they have the first claim on company asset.

4) Analysis Investment: Analysis investment is that investment operation that going through the analysis and they give the promise statement about principle safety and also adequate returns.

So this is the list of types of investment, so this is not an exotic investment list, and about them not other any investment is not like that. and this put randomly without any relations. (Difference between Investment and Speculation)

1) Intelligent Speculation: Those are intelligent speculation, you only get those risks, you are justifiable on that because you do good studies and whatever your prose and cause on your decision.

So this called Intelligent Speculation

In this, you take the risk, without reading that situation you just doing this, because you think these stocks going high.

Because you listen this is a popular company and lots of people talk about this company so this is all are bullshit.

Those are stocks price, and you are paying for that stocks, so we can divide them into two components.

Investment and Speculative components of Price:

so analyst judgement says that the investment of that stocks price is $25.

and other remains $13 is that speculation price.

so they represent the stocks market appraisal and long term prospects may be good and peoples bias is that this company is very good and they include the other factor of specular component.

So any investor/buyers pay more than the $25, then they have to recognise, they are paying for speculative possible so the author doesn’t say that this is wrong thinking or right thinking.

If you think this is justifiable to pay more than the $25 then, this is Bullshit Think.

and your brain is not set for investing.

So those are intrinsic value they can include in the speculative value also, but only for Intelligent Speculation.

So Intrinsic value has two components

If stocks price is equal to Intrinsic value and If they have more than then they include the unintelligent Speculation Value.

so this is all about the Difference between Investment and Speculation from the Security analysis book, chapter 4.

Read More: One Up On Wall Street book summary series